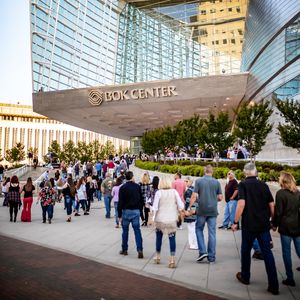 With its sweeping metallic architecture and glass facade, the BOK Center is an iconic entertainment venue that has been hosting world class events and performances at 200 South Denver Avenue in downtown Tulsa since 2008.

The BOK Center is the brainchild of former Tulsa mayor Bill LaFortune who proposed Vision 2025, which raised Tulsa County’s sales tax rate by one cent in order to fund capital improvements and economic development incentives.

César Pelli, an Argentine-American architect with numerous accolades including the design of the Petronas Towers in Kuala Lumpur, was tasked with designing the center. Its construction spanned the course of three years beginning on August 31, 2005. The ribbon-cutting ceremony on August 30, 2008, featured appearances by Tulsa’s own Hanson and Garth Brooks.

“It's as beautiful and grand as any place I've played,” Garth Brooks said during the opening night ceremony.

Amenities within the 19,199-seat BOK Center include a multi-purpose arena, lobby, three levels of premium seating, rental suites, 12 concessions and 12 bar locations. Public art is also showcased within the center thanks to a city ordinance that delegated 1% of construction costs - about $1.5 million - to be used for public artwork. The results are stunning with four 22-foot Native American medallions on the main concourse floor, 25 Tallgrass Prairie paintings on the lobby’s third level, a 9x24 foot painting of rearing horses and several other eye-catching pieces.

Since its opening day, the BOK Center has seen its share of well-known performers pass through its doors, including the first announced concert on September 6, 2008, when the Eagles sold out in just 35 minutes. The band later came back to Tulsa during the “10 for 10” Concert series in 2018 to celebrate the arena’s 10th anniversary. Other blockbuster concerts in the series included George Strait, P!NK, Blake Shelton, U2, Justin Timberlake, Elton John, Bruno Mars, Imagine Dragons and Metallica.

“It's as beautiful and grand as any place I've played." - Garth Brooks

The BOK Center has also played host to tons of Oklahoma musicians including Carrie Underwood, Reba McEntire, Toby Keith and Ronnie Dunn of Brooks & Dunn. Although the City of Tulsa owns the BOK Center, it is managed by SMG, a worldwide entertainment and convention management group that also manages the Cox Business Center in Tulsa and the Paycom Center in Oklahoma City.

There’s more to the BOK Center than just music. It is also a popular sporting venue and was actually the first location where the Oklahoma City Thunder played after moving to the Sooner State. Accommodating everything from arena football to hockey, the center is also the home base of the Tulsa Oilers, a professional ice hockey team in the ECHL. In the past, the BOK Center has housed the Tulsa Talons Arena Football League (2009-2011) and the Tulsa Shock (2010-2015), and it has hosted PBR rodeo events since 2009.

The BOK Center also has numerous accolades. It has been nominated for "Venue of the Year" eight times by the Academy of Country Music, seven times by Pollstar and five times by the International Entertainment Buyers Association (IEBA). In 2016 and 2018, the BOK Center was named “Arena of the Year,” a prestigious industry award that recognizes the top concert arena in the country given by IEBA. The center beat out competition including Madison Square Garden in New York and the T-Mobile Arena in Las Vegas.

“As always, we have to thank the concert promoters and agents who continue to believe in the Tulsa market,” said SMG Tulsa General Manager Jeff Nickler. “We have worked hard to bring a compelling line-up of shows to Oklahoma and are fortunate to be in a city where fans continue to purchase tickets in record numbers year after year.”