Embark on a grand Oklahoma adventure and explore the state with these regional road trip ideas. 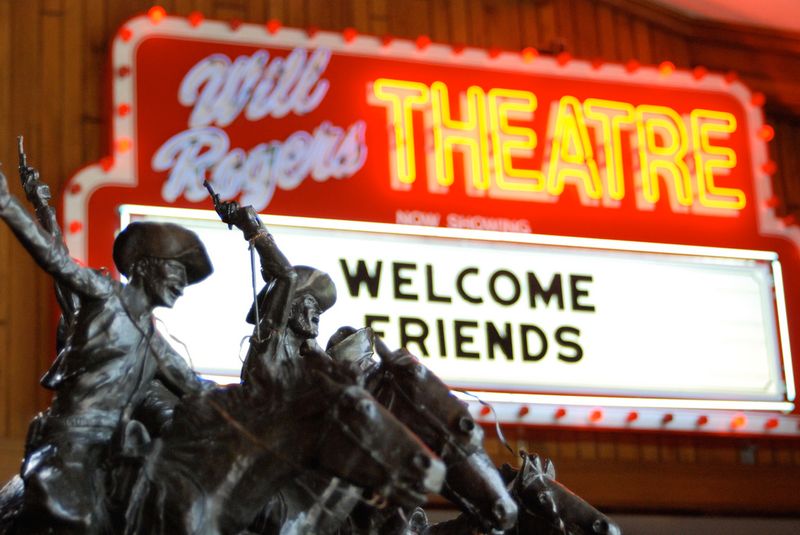 Contemplate Oklahoma's favorite son at the Will Rogers Memorial Museum in Claremore.

Explore the natural beauty of the J.T. Nickel Family Nature & Wildlife Preserve near Tahlequah.  The preserve features 15,000-acres in the rolling Cookson Hills overlooking the Illinois River and is part of The Nature Conservancy's offerings in Oklahoma.

Shop for tasty Amish delicacies at the Amish Cheese House in Chouteau.

Immerse yourself in Oklahoma's rich history at the Fort Gibson Historic Site and Interpretive Center in Fort Gibson.  Built in 1824, Fort Gibson offers pre-Civil War artifacts on display and is located near the Fort Gibson National Cemetery.

Bunk down in a cabin, set a canoe afloat or set up a tent along the shores of northeast Oklahoma's stunning Illinois River.  If you want to enjoy the river but don't want to camp, a number of lodges, motels, resorts and inns are located throughout the area.

Start the day with a cup of strong coffee at Adam & Eve's Coffee House in Broken Bow.

Between February and September, tour the Red Slough Wildlife Management Area to see dragonflies, snakes, alligators and more than 300 species of birds.  Birders have likened this area to the unique habitats off the Gulf Coast.

Visit the Museum of the Red River in Idabel for museum collections that are particularly strong in regional archaeological materials.  Don't miss the museum's dinosaur bones, Plains Indian garments and southwestern Pueblo ceramics, as well as pre-Colombian Middle and South American artifacts.

Feast on great-tasting steaks, chicken and savory appetizers in a relaxing atmosphere at Abendigo's Grill & Patio in Broken Bow.

Relax in cozy cabins or a beautiful lodge set amidst the natural splendor of the area at Beavers Bend State Park.

Tour some of the finest WPA construction in the nation at The Holy City of the Wichitas near Medicine Park.

Visit the Comanche National Museum and Cultural Center in Lawton for a glimpse of traditional Comanche culture and a detailed history of the Comanche people, regarded as some of the finest horsemen on the Great Plains.

Hike along trails within the rugged beauty of the Wichita Mountains Wildlife Refuge, where magnificent bison and elk roam freely.

Cool down in the abundant waters of Turner Falls, Lake Murray or Lake Texoma.

Relax and set your gaze upon the rolling Oklahoma countryside when you ride Amtrak's Heartland Flyer.  Depots are located in several towns across south-central Oklahoma.

Fun for kids of all ages, the Toy and Action Figure Museum in Pauls Valley was noted by Time magazine as one of the "Top 50 Most Authentic American Experiences."

Taste Italian food the way it was meant to be - heavenly - at Papa Gjorgjo's Restaurant & Deli in Ada.  Don't miss the stuffed mushrooms.

Chocolate dreams come true when you watch chocolate being made at Bedre Chocolate Factory in Davis.  Bedre is famous for gourmet chocolates, gift baskets and other traditional candies.

Journey into the heart of the Chickasaw Nation at the Chickasaw Cultural Center in Sulphur, a world-class museum devoted to the celebration of Chickasaw history and culture.

Take it higher and hike into the stark beauty of Black Mesa near Kenton.  The highest point in Oklahoma at 4,973 feet, the mesa rises some 600 feet above the surrounding desert terrain.

Delve into the cool depths of Alabaster Caverns State Park near Freedom, the largest natural gypsum cave in the world open to the public.

Step into the only remaining original sod house in Oklahoma at the Sod House Museum in Aline.  Built in 1894, the sod house is protected and preserved by the Oklahoma Historical Society.

Tour the Oklahoma City National Memorial & Museum in downtown Oklahoma City.  This memorial is a place for quiet reflection and a place to honor those killed, those who survived and those changed forever by the 1995 bombing of the Alfred P. Murrah Federal Building in Oklahoma City.

Immerse yourself in the world of art at the Oklahoma City Museum of Art in downtown Oklahoma City, where an extensive collection of European and American art and an outstanding film program await.

For diverse cultural delights, explore the bustling shops and restaurants of Oklahoma City's Asian District, where visitors will find Pho (a Vietnamese noodle soup), spring rolls, baguettes and a wide range of international delicacies at Super Cao Nguyen Market and various other stores.

Poke around the National Cowboy and Western Heritage Museum in Oklahoma City for contemporary and traditional Western art.

Dive into the fresh cuisine at 105 Degrees, Cheever's Cafe or Big Truck Tacos.

Fall in love with the nightlife scene found in the Bricktown Entertainment District.  Bricktown is full of restaurants, nightclubs, shopping opportunities and a can't-miss water taxi boat tour along the Bricktown canal.

The Philbrook Museum of Art, a unique combination of historic house, lush gardens and permanent art collections located on 23-acres just three miles from downtown Tulsa, is the perfect place to begin a Tulsa adventure.

Shop like a local at Utica Square or in the Brookside District - both offer a trendy mix of urban pizzazz.

Treat your ears to some of the hottest sounds from local, regional and national music acts at historic Cain's Ballroom.

Stop to refuel at the Stonehorse Cafe, famous for its bread pudding, or Fleming's Prime Steakhouse & Wine Bar, known for its celebrated wine list - the Fleming's 100.

Pick your favorite tea leaves and sample yummy confections at The Coffee House on Cherry Street, where smiling baristas woo visitors with chai and coffee in the midst of plush couches and chairs just right for java-infused chats in a cozy atmosphere.

Step into the bustling nightlife scene of the Blue Dome Entertainment District and enjoy nine square blocks filled with historic buildings and a diverse range of local pubs, diners and music venues.