Bring on the BBQ at Oklahoma’s Barbecue Events

Search out tender, juicy barbecue at some of Oklahoma’s tastiest BBQ events and festivals. 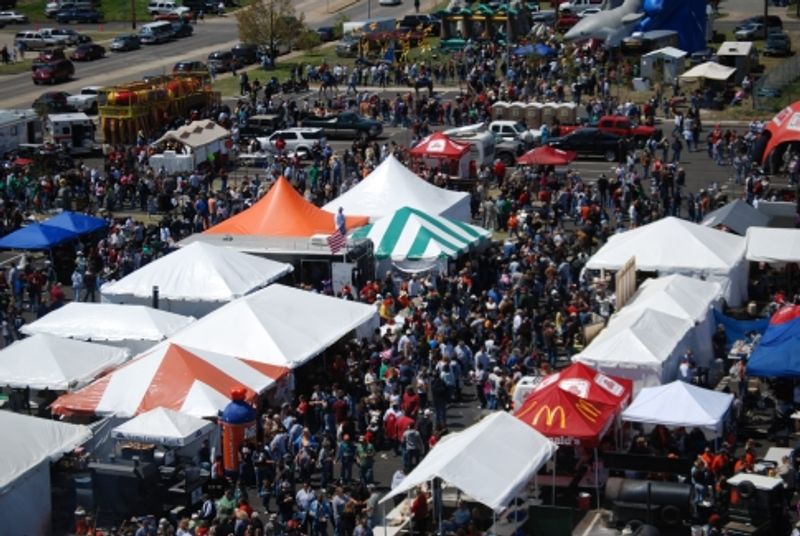 Oklahomans are serious about their barbecue. Representing every type of marinade, dry rub and sauce combination under the sun, Oklahoma’s delicious barbecue reigns supreme during the spring and summer months, when a handful of the state’s top festivals celebrate Oklahoma’s enduring love of barbecue with cuts of meat that have been seasoned, smoked and slathered in sauce to bring out the fullest flavor possible.

No matter which style of barbecue you prefer, you’ll find it all at Oklahoma’s barbecue festivals. Many of these events include competitions sanctioned by the Kansas City Barbeque Society, which only adds to the quality of succulent barbecue you’ll find there. But these events aren’t just about the food – they’re about having fun. So, slap on your bib, bring the whole family and get ready for some good, lip-smackin’ eats at Oklahoma’s top barbecue events listed below!

Coinciding with the Azalea Festival each April, the Exchange Club Chili & BBQ Cook-Off in Muskogee is a foodie’s dream come true. Watch the Azalea Parade on Saturday morning and gear up for a day of festivities and fabulous barbecue. Cooks will compete with tried-and-true barbecued pork, chicken, brisket and hot link recipes, as well as smokin’ hot chili concoctions. Purchase a tasting kit and check out the variety of foods, then vote for your favorite. A festival atmosphere featuring a kid’s zone complete with inflatables and pony rides makes this event perfect for the whole family.

Great food and rockin’ music meet each June at the Bricktown Blues & BBQ Festival in Oklahoma City. Head to the Bricktown Entertainment District, located in the heart of bustling downtown, for the chance to savor tasty meats while listening to the soulful sounds of award-winning blues bands. There is plenty of amazing barbecue to be had at this summertime celebration, a local summer tradition held since the mid-1990s, so bring your lawn chairs, cool off with a cold beer, enjoy hot barbecue, and settle in for this two-night event.

Tulsa doesn’t mess around when it comes to barbecue – they bring in the big guns for their Rock ‘N Rib Festival, held downtown each September right outside the BOK Center. Award-winning barbecue professionals from all over the country bring a variety of barbecue styles to compete for the Best of Show Award, and festival-goers line up to sample the tasty offerings, from ribs to chicken. Head out to this four-day food festival and you’ll find much more than barbecue. Visit vendors offering fair food, wine, beer and more while checking out local bands, and test your endurance on the free mechanical bull. There’s also a large area with inflatables, games and an obstacle course specifically for the kids, so bring the entire family.

Barbecue masters will grill up ribs, chicken, pork and brisket in the main competition, then compete with their barbecue rib recipes for the People’s Choice Award.

Along the banks of Lake Ponca in Ponca City you can taste barbecue and chili to your heart’s delight at the annual Cherokee Strip Cook-Off, held in September each year. Don’t miss the “Anything Goes” contest, which includes sides, dessert and more, then watch the competition heat up quicker than a hot grill as the barbecue really gets going. Sample chicken, pork ribs, pork and beef brisket, then try out a variety of chilis for a taste of what the cooks have to offer. In between bites, check out live music, vote for your favorite barbecue team in the people’s choice competition, or send the kids to play on the inflatables.

Make your way to Cushing for a fun-filled day of mouthwatering barbecue and festivities for the whole family at the annual BBQ 'N Blues Festival. Over 110 pounds are smoked on the World’s Largest Permanent Smoker at this June event. Make sure to purchase a tasting kit so you can try all of the delicious barbecue entries and vote for your favorite. Kid’s activities keep the little ones busy and live blues entertainment from as far away as Chicago will delight all ages.

Downtown Enid comes to life each April at the Roberts Ranch Smokin’ Red Dirt BBQ & Music Fest, where barbecue takes center stage. This fun-filled, three-day event features an arts festival, live music, games for kids and families, food, fireworks and much more. Barbecue masters will grill up ribs, chicken, pork and brisket in the main competition, then compete with their barbecue rib recipes for the People’s Choice Award.

Visit the quaint landmark of Totem Pole Park along Route 66 during the Totem Pole BBQ & Music Fest, held each October, and join others for a time-honored, nostalgic event under the shadows of a Route 66 icon. Bring your appetite and enjoy a barbecue dinner, then visit the 11-sided Fiddle Shop on the grounds of the park. Shop craft vendor booths for one-of-a-kind items and kick back in a lawn chair while you listen to local bands perform. A number of activities for kids are offered at this event, so bring the entire family.

Historic downtown Fort Gibson becomes a food and music mecca during the Smokin’ the Fort Barbecue & Chili Cook-Off. Wear your dancing shoes so you can kick up your heels at Friday night’s street dance. On Saturday morning, bluegrass music will fill the October air and set the mood for a day of sampling some of the best barbecue and chili in the state. Make sure to get a tasting kit so you can vote for your favorite cooks in the taster’s choice competition.

Stop by Cherokee Casino Will Rogers Downs in Claremore for the Boots & BBQ Festival, held in May of each year, where you will find exciting activities and tasty food all day long. Kids will enjoy pony rides and jumping on inflatables, while all ages can tap their feet to live music and browse vendor booths. Purchase a tasting kit so you can experience delicious barbecue recipes in categories including chicken, beef brisket, pork butt, pork ribs and dessert. Choose your favorite barbecue recipe and vote for it to be the winner of the People’s Choice Award.