Enjoy the sights and sounds of Oklahoma's rich rhythm and blues culture and discover the state's history as a jazz mecca. 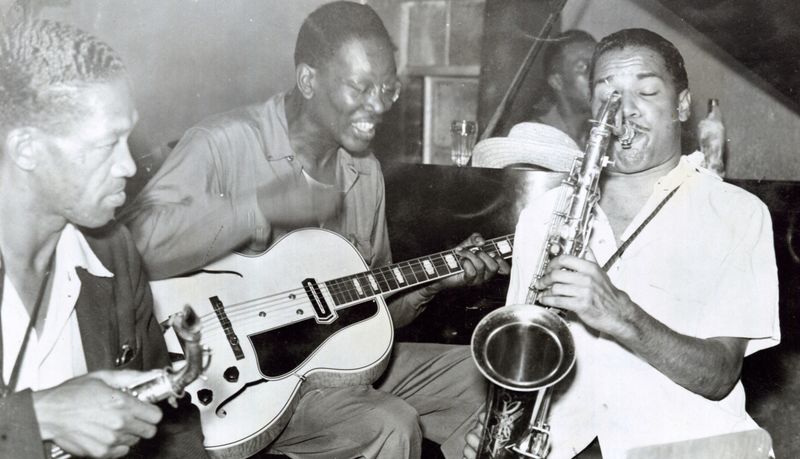 Oklahoma has produced some of the most influencial rhythm and blues greats and jazz pioneers. From historic downtown neighborhoods to small-town music festivals, visit the former haunts of the state's jazz legends and discover their lasting impact on music history.

The Deep Deuce area of Oklahoma City carries tremendous historical significance as a metropolitan center for jazz music, and Black culture and commerce. One of the city's largest African American neighborhoods in the 1940s, Deep Deuce was home to acclaimed jazz musicians like Charlie Christian and Jimmy Rushing. The area also welcomed music legends Billie Holiday, Jackie Robinson and Nat King Cole during its heyday.

From the 1920s to '50s, Oklahoma City's own blues shouter and swing jazz singer Jimmy Rushing could be found throughout Deep Deuce performing lead vocals for Walter Page’s Blue Devils, the Bennie Moten Band and the Count Basie Orchestra. Today, Oklahoma City’s Deep Deuce Grill operates in a two-story brick structure built by Jimmy Rushing’s father in the early 1900s. Stop in for lunch or dinner and hang around for dancing or a game of pool in one of the neighborhood’s original buildings.

The Deep Deuce is adjacent to Oklahoma City's Bricktown Entertainment District, with a wide variety of restaurants, shops and entertainment venues. While in Bricktown, head to the Chickasaw Bricktown Ballpark where the History of Bricktown mosaic murals include homages to Deep Deuce area and Charlie Christian. Visit the American Banjo Museum in Bricktown and trace the history of the banjo, from its American introduction by African slaves to its jazz heyday in the 1920s and '30s. Round out your Bricktown experience with a stop at Jazmoz’s Bourbon Street Café at night for live jazz and tasty Cajun cuisine along the canal.

Once a hotbed for jazz and blues, Tulsa’s Greenwood District is known as the site where Count Basie first encountered big-band jazz. From the early 1900s through the 1940s, North Greenwood Avenue in Tulsa was known as “Black Wall Street,” as the African American community that lived there developed a profoundly successful and enviable infrastructure along the avenue. Prior to 1921, the 36-square-block area encompassed hundreds of businesses and approximately 11,000 people. There were 21 churches, 212 restaurants, two movie theaters and more than 400 businesses, including a variety of jazz clubs, in north Tulsa at that time.

The main thoroughfare was Greenwood Avenue, which was intersected by Archer and Pine Streets. Tulsa R&B group The GAP Band actually took its name from the famous Greenwood, Archer and Pine intersection, using the first letters in each of the street names as inspiration. After the tragic events of the 1921 Tulsa Race Massacre destroyed much of the district, the community rebuilt over many years. Today, the Greenwood Historical District showcases its heritage and history at sites including the Greenwood Cultural Center, Greenwood Rising and the Mabel B. Little Heritage House.

Jazz Across the State

Jazz in June is one the state’s biggest and longest running annual music festivals focusing specifically on the genre. Spanning an entire weekend, locally and nationally recognized jazz and blues acts come together for an amazing line up in Norman.

One of the best places to hear up and coming jazz artists in the state can be found in Edmond. The UCO Jazz Lab has the look and feel of a New Orleans jazz club and offers live music each weekend.

The NSU Jazz Lab in Tahlequah has welcomed famous jazz artists including Ray Brown and Diana Krall and the SWOSU Jazz Festival in Weatherford has been preserving the genre for decades. Legendary West Coast jazz trumpeter Chet Baker was also born in the small Oklahoma town of Yale.