Oklahoma has played host to a variety of Hollywood films - from heart-wrenching dramas to experimental features and zany comedies to high impact thrillers. Whether you're a true cinema buff or simply enjoy catching the occasional flick, you'll have fun exploring these filming locations in the Sooner State. 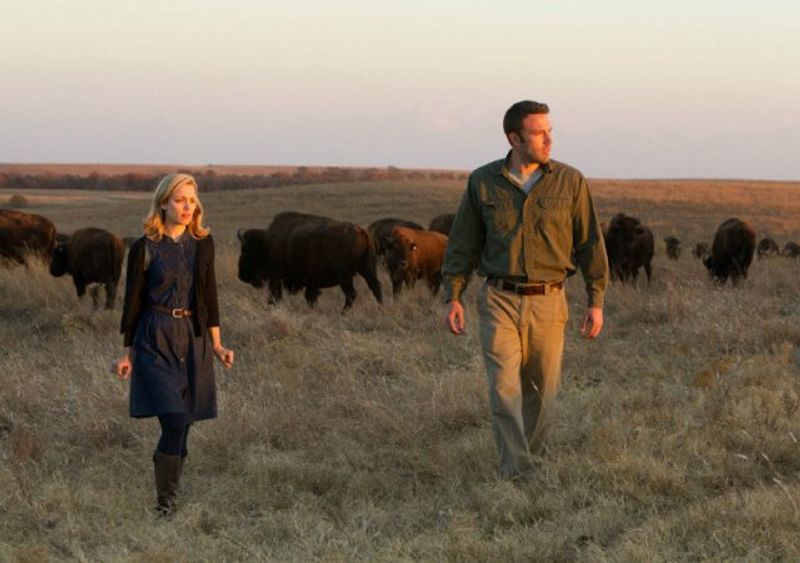 Ben Affleck and Rachel McAdams roam the Tallgrass Prairie Preserve in Pawhuska in the film To the Wonder.

With a variety of diverse landscapes and a history of welcoming award-winning production crews, Oklahoma has established itself as a first-rate filming location. Some of America’s favorite movies, from period pieces about the Great Depression to modern classics you’ve probably seen in theaters, were shot in the Sooner State. Hit the road to see where superstars and famous directors worked to create the following films.

Set in Oklahoma’s beautiful Ozark Mountains, Where the Red Fern Grows is a coming-of-age story about a young boy who trains two hunting dogs during the Great Depression. The screenplay was based off the children’s book of the same title by Oklahoma author Wilson Rawls.

The popular 1974 movie adaptation was filmed in Vian and Tahlequah, where visitors can attend the annual Red Fern Festival, a send-up to the novel that features hound dog trials, 1930s-era children’s games and tours of the movie’s filming locations. Watch the movie and you’ll also catch a glimpse of the waterfall at Natural Falls State Park.

Travel to the town of Wakita in far northern Oklahoma to visit filming locations from this epic blockbuster, which chronicles the nail-biting adventures of Oklahoma storm chasers. Visit the Twister Museum to view movie memorabilia and learn about the tricks of the film-making trade. Tour the town to see the site of Aunt Meg’s house and the town’s water tower, which was featured in one of the film’s dramatic fly-over shots. Norman’s Owen Field made it into the film and Helen Hunt stayed at the Montford Inn Bed & Breakfast during filming.

The Dust Bowl and the great Okie migration west during the Great Depression were beautifully captured in John Steinbeck’s 1939 novel The Grapes of Wrath. The story was quickly adapted into an Oscar-winning movie by legendary director John Ford. Starring Henry Fonda, the film tells the story of Tom Joad, who is forced to move his family from Oklahoma to California after his farm turns to dust. The Beckham County Courthouse in Sayre makes an appearance in the film as the Joad family journeys along Route 66.

The ensemble cast of August: Osage County came together in the Oklahoma towns of Pawhuska and Bartlesville to turn Tulsa-born Tracy Letts’ play into a piece of award-winning cinema. Julia Roberts, Meryl Streep, Ewan McGregor and the rest of the cast convened in rural Pawhuska for much of the principal photography. Set in Osage County, you’ll also see shots of Tenkiller State Park in this emotional movie about family and returning to your roots.

A pillar of 1980s cinema, The Outsiders was based off Oklahoma author S.E. Hinton’s novel and filmed completely in northeastern Oklahoma. Legendary director Francis Ford Coppola brought the story of Ponyboy and his gang of Greasers was brought to life in Owasso, Skiatook and Tulsa. The historic Admiral Twin Drive-In was used as the backdrop for the characters’ 1950s hangout and is still in operation today.

A pillar of 1980s cinema, The Outsiders was based off Oklahoma author S.E. Hinton's novel and filmed completely in northeastern Oklahoma.

Fans can also visit The Outsiders House in Tulsa, the actual home from the movie that was restored in 2019 by House of Pain founding member Danny Boy O'Connor. Step inside the Curtis Brothers' humble abode to relive iconic scenes and see unique movie artifacts.

While Amy Sherman-Palladino’s hit television series is primarily set on the bustling streets of 1950s New York City, The Marvelous Mrs. Maisel revealed in season three that the titular character’s mother grew up in Oklahoma. Watch for a variety of northeastern Oklahoma landscapes in Osage County near Pawhuska, featuring vast prairies, rolling hills and bison.

Based on the best-selling book by author Neil Gaiman, the first season of the dramatic fantasy television series American Gods features a number of Oklahoma locations sprinkled throughout the first few episodes, including the Oklahoma State Penitentiary in McAlester and Gloss Mountain State Park near Fairview. You’ll also see the dunes of Little Sahara State Park in Waynoka in this season, which were dressed in elaborate set pieces like a massive door that opened to an alternate reality.

Although the story is set in small-town Texas, crime drama The Killer Inside Me was mostly filmed in Oklahoma. Movie stars Jessica Alba, Casey Affleck and Kate Hudson traveled around the state filming in Guthrie, Enid and Tulsa. Oklahoma City also played backdrop for this tense thriller set in the 1950s and Cattlemen’s Steakhouse in Historic Stockyards City was even the location for Max’s Restaurant.

Author S.E. Hinton’s characters made it to the silver screen again when Rumble Fish was filmed in Tulsa in the early 1980s. The star-studded cast including Matt Dillon, Mickey Rourke, Diane Lane and Nicolas Cage plays out their characters’ tumultuous relationships on the streets of downtown Tulsa and Sapulpa. Look for what is now the Tulsa Arts District in this black and white adaptation of Hinton’s novel.

Director Terrence Malick, who once called Oklahoma home, brought his talents back to the heartland in the 2012 film To the Wonder. Starring Ben Affleck and Rachel McAdams, this love story unfolds amidst the breathtaking scenery of the Tallgrass Prairie Preserve in Pawhuska and the Pawnee Bill Ranch Historic Site & Museum in Pawnee. You’ll also see a bit of Bartlesville, including the architecturally stunning Bartlesville Community Center, in the movie as well.

In Elizabethtown, Orlando Bloom’s character takes a cross-country road trip that leads him to a variety of historic and beautiful places, including some local Oklahoma gems. You’ll catch a glimpse of the Cherokee Trading Post & Travel Mart in Calumet before he visits the Survivor Tree at the Oklahoma City National Memorial & Museum, which Kirsten Dunst’s character claims is her “favorite tree in the world.”

Best Picture winner Rain Man was filmed in a number of places around the state including El Reno and Guthrie. In the movie, Dustin Hoffman and Tom Cruise embark on a road trip and wind up at the Big 8 Motel. The location for the pivotal scene was actually in El Reno, even though the motel’s glowing neon sign reads “Amarillo’s Finest.”

While the Route 66 motel has since closed, you can still visit the location of the clinic where Charlie takes Raymond on the corner of Oklahoma and Division Streets in Guthrie and the W.S. Kelly Gas Station where the pair stop to make a phone call, located in Cogar about 10 miles south of El Reno.

The 1970s action thriller Dillinger tells the high impact story of the “gangster’s gangster” John Dillinger. While you’re watching actor Warren Oates on the run from the law, you’ll see shots of Ardmore, Enid and Nash. Mannsville, Oklahoma was the location of the bridge shootout, and they even filmed at the Skirvin Hotel in downtown Oklahoma City, which has since been renovated.

“Weird Al” Yankovic is known for his pop hit parodies, but he also wrote and starred in UHF, which was filmed entirely in Tulsa. This 1989 sight gag comedy follows the antics of George Newman as he manages a local TV station. Before becoming the owner of UHF, Newman works several jobs including as a cashier at the fictional Big Edna’s Burger World, the real-life location of Billy Ray’s Catfish & BBQ.

Bringing Up Bobby stars Milla Jovovich as a loving mother with a criminal record. In this heartwarming story, her longing to give her son a normal life leads them to Oklahoma. You’ll see shots of Leadership Square in downtown Oklahoma City as she pulls off cons. Also of note, the production crew spent an evening filming in POPS, an iconic diner along Route 66 in Arcadia featuring hundreds of soda flavors.

The slasher movie craze of the late 1970s and early 80s didn’t escape the Sooner State. Pop some popcorn and watch this horror movie set at Oklahoma’s beautiful Lake Tenkiller in Cookson. While Tenkiller Dam and Gore road signs can be seen as the heroines drive through the surrounding hills, some of the film’s scenes were also shot around nearby Fort Gibson Lake.

Listen for the movie’s fictional tale of “Tenkiller” – an Indian maiden who killed ten brave warriors of a neighboring tribe and whose spirit now resides at the bottom of the lake. In real life, Lake Tenkiller was named after a prominent Cherokee family that owned a ferry service near the location of today’s Tenkiller Ferry Dam.

Enid, Oklahoma is featured prominently in this 2018 independent drama by actor and director Paul Dano. Starring award-winning actors Jake Gyllenhaal and Carey Mulligan, the film is based on Richard Ford's novel that deals with a teenage boy’s experience of his parent’s complicated divorce and the tribulations that follow.

Although set in 1960s Montana, those familiar with Enid will recognize certain locations throughout the movie, including scenes in the Waverley Historic District, businesses on E. Broadway Street and the East Maine Shark Bridge. Some Enid residents even served as extras in this critically acclaimed film.

A musical drama about a grieving father who finds hope through his late son’s recordings, Rudderless features the towns and scenery of central Oklahoma. Watch this heartfelt movie directed by actor William H. Macy and spot downtown Guthrie, Lake Hefner in Oklahoma City and the University of Central Oklahoma in Edmond as prominent locations in the film. Rudderless also showcases Oklahoma musicians Chelsey Cope and Travis Linville, and even includes cameos from newscasters Kevin Ogle and Linda Cavanaugh.

Looking for even more movie magic in Oklahoma? Check out these additional filming locations: