All that riding and roping make cowboys work up an appetite as big as a western Oklahoma sunset. Here’s the inside scoop on where to get your fill. 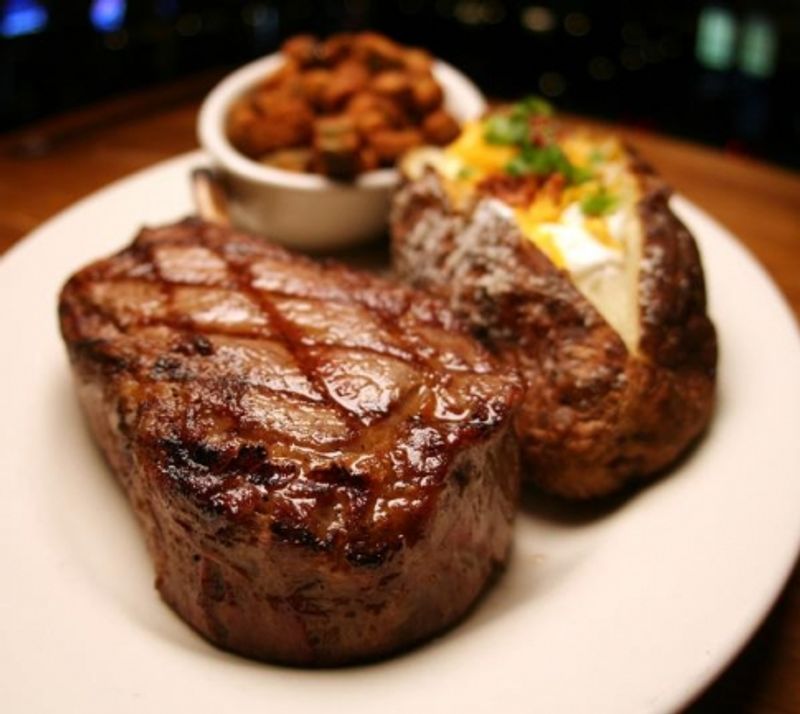 Whether ordering a succulent steak or indulging in a perfectly-prepared chicken fried steak smothered in creamy gravy, Toby Keith's I Love This Bar & Grill should be at the top of your American comfort food checklist.

Cowboy food boils down to one major food group: beef.  Whether it’s smoked brisket, beef stew, a 21-ounce ribeye or a stick of jerky you can chew on until the cows come home, cowboy food is all about beef – with some beans and a corn dodger or two.

If the National Cowboy & Western Heritage Museum is the mecca of Western art and history, Cattlemen’s Steakhouse is its culinary cousin. The restaurant opened in 1910 and remains in Stockyard City, although it has changed owners several times. The most colorful of those ownership changes was in 1945, when Gene Wade won it from Hank Fry with a roll of the dice. There’s no gambling on the Cattlemen’s menu: steaks are hand-cut from corn-fed, aged beef and cooked over a hot charcoal flame.

There’s only one place in Oklahoma to get huge sandwiches stacked on five inch buns: Jigg’s Smokehouse in Clinton.  Here, the third generation of Klaassens has perfected each of the seven items on the menu, and the signature chopped beef is superb especially with a little of the homemade chow chow. You won’t find any fancy white tablecloths at Jigg’s; the food is served on a piece of paper with plastic utensils.

The secret at Mahylon’s Bar-B-Q is two huge, custom-built smokers that get 100 percent of their heat from genuine hickory. With all the traditional barbecue favorites on the menu, it's hard to pick the best though many swear by their pork ribs. The Muskogee restaurant is impressively clean, and the cobblers and homemade brownie sundae are worth saving room for.

Murphy’s may call itself a steakhouse, but the signature item on this menu is the hot hamburger. Unlike any hamburger that has come before it, the open-faced hot hamburger is prepared on white bread, plated, topped with a mountain of thick-cut fries and smothered in piping hot brown gravy. This hidden gem is well-known by Bartlesville locals who pack Murphy’s red vinyl booths and chrome-covered counter stools day in and day out.

Every now and then, a barbecue comes along that must be shared with the masses. Such is the case with Danny's BBQ Head Quarters. The sauce here is legendary and got its start on a Navy ship kitchen when “Uncle Bud,” a.k.a. Donovan Fred Head, whipped it up from scratch while serving in World War II. Visit the Ponca City restaurant to taste it for yourself on a sandwich or plateful of your favorite smoked meat. Before you head out, be sure to grab a bottle of your favorite flavor to go.

The Clanton clan has been making chicken fried steak in Vinita since 1927, and you won’t find much better than at Clanton's Café on Route 66. The steak is hand-pressed, grilled and smothered in creamy white gravy. They claim the recipe hasn’t really changed since Sweet Tater Clanton started the business over 80 years ago. If you’re feeling adventurous, try the calf fries.

Toby Keith’s I Love This Bar and Grill - Oklahoma City

Part saloon, part dance hall, part restaurant and all cowboy is a great way to describe Toby Keith’s I Love This Bar and Grill. Located in the Bricktown Entertainment District, Oklahoma City’s nightlife hotspot, the restaurant is your one-stop shop for all palates. You can sample everything from ribs and chicken fried steak to a 10-ounce sirloin and a 20-ounce bone-in ribeye. The smoked prime rib is a house specialty, starting at eight ounces and going up to whatever your stomach can hold.

Click’s Steakhouse has been serving up huge portions of steaks, pork chops and shrimp for over 50 years. Little has changed on the menu over the past half-century, though there has been plenty of time to perfect each recipe. Whether you like your steak chargrilled or dripping with juices, you’ll get just what you order from this popular Pawnee restaurant, where customers drive in from miles around just for a meal. One word of advice: Save room for a slice of Click’s legendary meringue pie.

When you close your eyes and picture the perfect cowboy cuisine, does it involve a thick-cut steak, foil-wrapped baked potato and giant roll with a glazing of butter? If you answered yes, then look no further than Rockin H Land & Cattle Co. in Temple. One of their signature dishes is appropriately dubbed “The Boss,” an enormous 14-ounce prime rib served with both horseradish and au jus sauce, as well as a salad and baked potato. No matter what you get from this restaurant, you won’t be going home hungry.

Mac's Barbecue has been serving up top-notch hickory and pecan smoked meats for nearly 30 years. Sate your monumental hunger for a modest price with the three-meat combo or the mac sandwich, a soft bun that's piled high with chopped beef, bologna and hot links before being drenched in a tangy sauce. Or, try something completely different like the Frito chili pie. This local favorite is made with Fritos, a handful of cheddar cheese, onions, chopped brisket and Mac's signature sauce for a flavor combination that's out of this world.