While making your way across Oklahoma, stop and gaze at vibrant mural artworks that bring building walls to life. Explore Oklahoma’s exciting past as you take in historical murals and appreciate the unique creative visions of some of Oklahoma’s most talented artists. 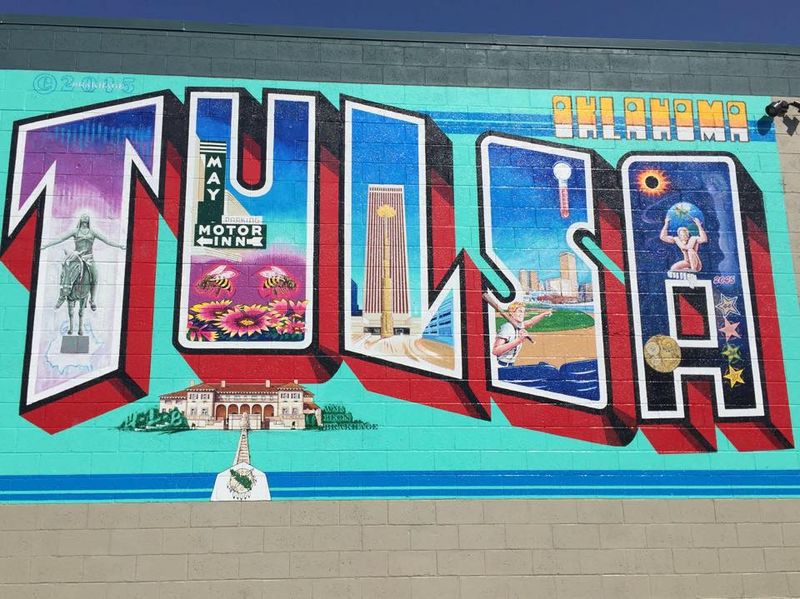 The artist behind the iconic "Greetings from Austin" postcard mural repurposed this same theme on the walls of a Tulsa building, bringing life to this Tulsa Postcard Mural.
Photo Credit: Provisions Fine Beverage Purveyors

When Oklahoma’s roads beckon, begging you to trek across the state, make a pit stop in a small Oklahoma town or bustling city to find vivid murals hidden within its cityscape. Whet your artistic palate in one of the many districts thriving with multiple murals, or travel across the vibrant state to view the extensive portfolio of several standout Oklahoma artists. When you spot a piece of art on the wall of an Oklahoma building, take a closer look and appreciate its creative elements and historical nods.

Inspect several Oklahoma murals like the Fairview Historical Mural in Fairview and the 1891 Land Run Mural in Davenport, and you’ll notice the same signatures cropping up again and again. A handful of Oklahoma artists have left their mark across the state, creating historical timelines of various towns in mural form. Peruse the work of a few of the most recognized mural artists and see if you can spot their unique, picturesque artwork decorating local business and infrastructure walls.

Palmer Studios, based in Edmond, is largely responsible for the small town historical murals overtaking many a downtown building such as the Trout Capital Mural on a tea room wall in Gore. Dr. Bob Palmer, a retired UCO professor that spearheads this local art studio, has traversed across the state to create murals like the Muskogee Postcard Mural in Muskogee, celebrating many small towns’ Western heritage. Palmer brought his studio artists and students from his UCO mural classes along to knock out murals like the “Yesterday’s Commerce” Mural in Historic Downtown Edmond and the Oil Industry Mural in Hennessey in a matter of days. Palmer Studios also created the popular “Oklahoma!” mural in Bricktown and others for the state centennial celebration in Oklahoma City (Dr. Palmer was named the 2007 Centennial Feature Mural Painter). Every time the artists from Palmer Studios packs up their brushes, they leave a new mural like the Welcome to Watonga Mural in Watonga in their tracks before hitting up the next town in need of historical artwork.

Take a Route 66 road trip and see if you can spot geometric, Oklahoma-themed murals created by Rick Sinnett. In downtown Oklahoma City, for instance, see his work in the massive “This Land” Mural on the Climb UP silo. Sinnett has created a series of standout murals in Oklahoma, including the Red Tail Hawk Mural in Norman and the nearby Three Days Mural. Each of this American folk artist’s murals contains elements of Oklahoma culture and history, including the state bird, the scissor-tailed flycatcher and numerous bison. Sinnett’s mural work across the state has only just begun, and he has plans to add several new ones along Route 66 towns to attract new visitors to these hospitable hubs.

Spend the day exploring Hominy and see more than 40 murals created by local, Native American artist Cha' Tullis. Take a look at Tullis’ “Crossing Boundaries” Mural on Main Street, which pays tribute to his Native American ancestors and admire the ornate details of traditional dress and beadwork in Tullis’ “Following Mother Following Tradition” Mural. Most of Tullis’ artwork depicts pieces of his Blackfoot and Cherokee heritage, celebrating Native Americans’ tribulations and rich culture. Also, before you leave Hominy, be sure to study Tullis’ impressive, eight-part “Majestic” series within this “City of Murals.”

If you’d like to venture into a stunning world of murals, head to one of these burgeoning mural districts where many different, talented artists have left their mark on town walls. Each of these mural-rich areas is brimming with decorative details and historical elements.

Head to one of these burgeoning mural districts where many different, talented artists have left their mark on town walls.

As you drive along Western Avenue in Oklahoma City, check out the latest Taste of Western public art project. Five murals were created for the annual art and culinary festival's inaugural 2014 event, including the "Contact Light" mural and the "Oklahoma Aiukli" mural, inspired by a local Choctaw teenager named Bella. Notice the 2015 additions to the Western Avenue district while visiting local restaurants like The Lobby Cafe & Bar or Sushi Neko. Both the “Vibratory Messages Generated by Tethered Bees” Mural and the “Wilderness on Western” Mural have added a unique series of painted animals and insects to this Oklahoma City street.

Stroll through the Plaza District in Oklahoma City, and on your way to meet friends at Oak & Ore or The Mule pay a visit to several of the Plaza Walls mural project, featuring rotating artwork that fills the area’s back alleys and side streets. For about a month, a one-of-a-kind mural will appear on the wall of a shop like Bad Granny’s Bazaar and then disappear and be replaced by another. While you venture through this Oklahoma City district, see if you can catch a mural artist in the act of creating, like frequent contributor Dylan Bradway of DNA Galleries.

Historians who double as art lovers will appreciate the long list of historical murals commissioned by the Alva Mural Society. Make the drive to this charming town to learn more about some of Alva’s most important citizens through the murals dedicated to them. The Charles Share Mural, for example, commemorates the man who funded several town facilities like the library and hospital. You can also relive important moments in history with murals like the Battle of Turkey Springs Mural which details the historic conflict between the US Army’s 4th Cavalry and the Dull Knife and Northern Cheyenne warriors.  Other works, like the “Alva Speedway” Mural and the “Castle Burning” Mural, capture other vital moments in Alva’s fascinating history.

Tour through Stillwater and see Cooksey's Corner Mural, which memorializes the old grocery store that once stood on Main St during the early 1900s, or pay a visit to Shawnee to learn more about Richards Drug, a staple of the community since the 1930s, through the  Richards Drug Mural painted on the historic business’s wall. Venture down to Duncan to view the Rhythm & Routes Mural that retells the origin story of Elvis Presley’s “Heartbreak Hotel,” which was written by Oklahoma songwriter Mae Boren-Axton. Travel to Chickasha to share in the town’s pride, as displayed in the Chickasha Football Mural, painted on the local high school or get a glimpse of an Oklahoma City postcard greeting  when you take in the details on the Oklahoma City Landmarks Mural, located on the walls of a local frame shop.

Plan a trip to see some of the strikingly creative murals residing on buildings throughout the state. Relive your college days with a detour to Chickasha’s University of Science and Arts of Oklahoma where you can see the attention-grabbing “Universal Creativity” mural at the college’s Davis Hall, which was created with fast-drying acrylic paints. Consider perusing the “Transcending the Plains” Mural in Anadarko, which represents the Kiowa heritage of the recently deceased artist, Huzo Paddlety. You can also head to Norman and check out the Tattoo Woman Mural featuring a striking, red-headed woman that attracts visitors to this Main Street tattoo parlor. The “Cultivation” Mural, which transformed a high-traffic underpass in Oklahoma City’s Bricktown into a vibrant walkway, is another impressive piece of work. Wrap up your mural tour in Tulsa, where you can view the standout Tulsa Postcard Mural, which depicts iconic Tulsa landmarks in a creative way.