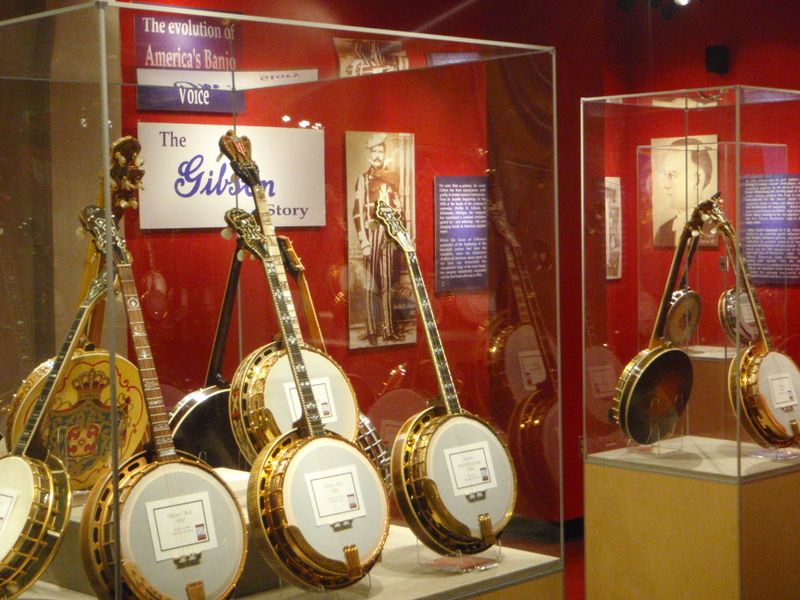 In his new, landmark documentary series airing and streaming on PBS, Ken Burns explores the origins and development of country music in America. Throughout the #CountryMusicPBS series, Oklahomans offer vital contributions, with regular Sooner State artist, group and venue features appearing in each of the eight episodes. After watching the Country Music PBS series, embark on an Oklahoma country music journey inspired by the Oklahoma artists who shaped this amazing story.

Albert Brumley
In episode 1, listen close, and recognize the familiar Albert Brumley tune, “I’ll Fly Away” playing in the background. This Oklahoma Music Trail gospel artist shaped not only the gospel music industry but also country music origins. In fact, in episode two of this country music documentary series, you can also hear “Turn Your Radio On," plus a discussion of Hank Williams “borrowing” Brumley's “He Set Me Free” music to write “I Saw the Light.” Read more about Brumley's Oklahoma roots and songwriting milestones, and visit his regular Oklahoma haunts, from Rock Island to Vinita.

American Banjo Museum
The first episode of the Country Music series also details a history of the banjo, an instrument derived from the African lute that has been an iconic part of country music history. Dive deeper into the transformation of the banjo into the modern-day iteration at the American Banjo Museum in Oklahoma City, containing two stories’ worth of ornate banjos, rotating exhibits, audio recordings and more.

Woody Guthrie
Folk music legend and Oklahoma native Woody Guthrie gets an honorable mention in Episode 2. Ken Burns traces the history of Woody Guthrie's "This Land is Your Land" back to the Carter Family's "Little Darling, Pal of Mine" hit, which was based on the "When the World is On Fire" hymn, created by a black minister. Learn more about Okemah's own Woody Guthrie before visiting historic sites associated with the Dust Bowl icon, including his namesake museum in Tulsa, which houses handwritten lyrics, original drawings and his guitar collection.

Bob Wills
Also featured in this episode, Bob Wills and the Texas Playboys are credited with creating Western swing music. Ken Burns touches on the Tulsa radio station KVOO, where Bob Wills and the Texas Playboys ran their own daily show for a decade. In fact, their show was broadcast live six days a week from Cain’s Ballroom, a historic Oklahoma Music Trail venue worth reading more about. After learning more about the legend (and potential ghost friends) Bob Wills left behind, check out Tulsa-centered stops synonymous with this master fiddler.

Merle Haggard + "Okie From Muskogee"
Merle Haggard is also mentioned throughout the series. Known for writing and performing “Okie From Muskogee,” Merle Haggard helped put this Oklahoma town on the map. Visit the Oklahoma Music Hall of Fame & Museum, located in Muskogee, the inspiration for one of Haggard's most famous hit songs, and read about its early days and history of inductees.

Wanda Jackson
Hear from the “First Lady of Rockabilly” herself in this episode. Listen to Wanda Jackson recount her own experiences in the country music industry. Plus, hear more about her history as America's first female rock and roll singer. Then, go on a Jackson-inspired road trip as you visit the Oklahoma streets named after this small-town girl who hit it big.

Roger Miller
The fourth episode also focuses on Roger Miller, an Oklahoma native who made the switch between picking cotton in his home state to writing country hits in Nashville. Best known for “King of the Road” and “Chug-a-Lug," this country artist got his start with the help of another Oklahoman. Friends since boyhood, Sheb Wooley taught him his first guitar chords. See the site of Roger Miller's childhood home, and view the Boulevard named after him.

Gene Autry
Gene Autry is a major focus in Episode 2 of Ken Burns' series. In this episode, hear the story behind the town of Berwyn, which renamed itself Gene Autry after him. Learn more about this legendary Oklahoma Western star and singing cowboy before taking a tour of his acclaimed hotspots around the Sooner State, including his namesake Gene Autry Oklahoma Museum. In Episode 5, Ringo Starr mentions Gene Autry as the most significant musical force in his life.

Leon Russell
Rock musician and Grammy Award-winning songwriter Leon Russell kicks off Episode 6 with his original "Will the Circle Be Unbroken" hit. Find out more about Leon Russell's creation of the signature Tulsa Sound, based out of his well-established Church Studio. Then, visit Leon Russell-related sites, including his legendary recording studio, where artists ranging from Eric Clapton and The GAP Band to Bob Dylan and Tom Petty & the Heartbreakers once recorded.

Roy Clark
This episode also dives into the influence of Hee Haw on country music, which was co-hosted by Buck Owens and Oklahoma country artist Roy Clark. Read more about this versatile Grammy Award-winning artist, comedian and talk show host before traveling to his longtime home of Tulsa. Once you arrive, be sure to catch a Tulsa Drillers game to support the Double-A baseball team he once owned.

Vince Gill
The documentary hones in on country ballad singer Vince Gill throughout the series, including his Episode 7 interview about the time he opened for KISS at an Oklahoma City show. This Country Music Association and Grammy Award-winning artist got his own influence from country artists who came before him. Learn more about this Oklahoma native's Norman upbringing and his time in the Bluegrass Alliance before hitting his favorite Oklahoma joints, like Ted’s Cafe Escondido and Byron's Double Stop Fiddle Shop & Music Hall.

Reba McEntire
Episode 8 casts a spotlight on the "Queen of Country," Reba McEntire, a small-town Oklahoma girl who transformed into a country music superstar. As discussed in this episode of the documentary, Reba McEntire faced her share of struggles as a woman in the country music industry. In fact, it took her four albums to garner success. Discover more about Reba McEntire's start on the Oklahoma rodeo arena circuit before her transition into a full-time singer. Then, make a trip to some of her childhood destinations, including local stages where she once performed.

Garth Brooks
Get a glimpse of Garth Brooks' musical influences and time spent studying at Oklahoma State University in this episode of Ken Burns' film. Uncover more about this Oklahoma honky-tonk artist and his local pub circuit beginnings before Nashville called his name. Embark on a tour of Oklahoma places with a Garth Brooks connection next, including the Yukon Czech Festival where he once made kolaches and Stillwater nightlife venues like Tumbleweed Dance Hall.